" We were lucky enough to make it to the Naadam Festival while we were traveling through Mongolia. Naadam Festival is the biggest major national holiday in Mongolia and is celebrated across the country. The major event is celebrated in the countries capital Ulaanbaatar, but there are smaller more provincial celebrations across the country. The Naadam festival has three main sporting events: wrestling, archery and horse riding. All of these events are taken incredibly seriously." / Sally And Ed /

The biggest festival (National Naadam) is held in the Mongolian capital Ulaanbaatar during the National Holiday from July 11 – 13, in the National Sports Stadium. Naadam begins with an elaborate introduction ceremony, featuring dancers, athletes, horse riders, and musicians. After the ceremony, the competitions begin. The competitions are mainly horseback riding. Naadam is the most widely watched festival among Mongols, and is believed to have existed for centuries in one fashion or another. Naadam has its origin in the activities, such as military parades and sporting competitions such as archery, horse riding and wrestling, that followed the celebration of various occasions, including weddings or spiritual gatherings. It later served as a way to train soldiers for battle. Now it formally commemorates the 1921 Revolution when Mongolia declared itself a free country. Naadam also celebrates the achievement of the new state. Naadam was celebrated as a Buddhist/shaman holiday until secularization in the 1930s. The three sports are called "Eriin 3 naadam" which is called three games of man in English. Genghis Khan's nine horse tails, representing the nine tribes of the Mongols, are still ceremonially transported from Sukhbaatar Square to the Stadium to open the Naadam festival 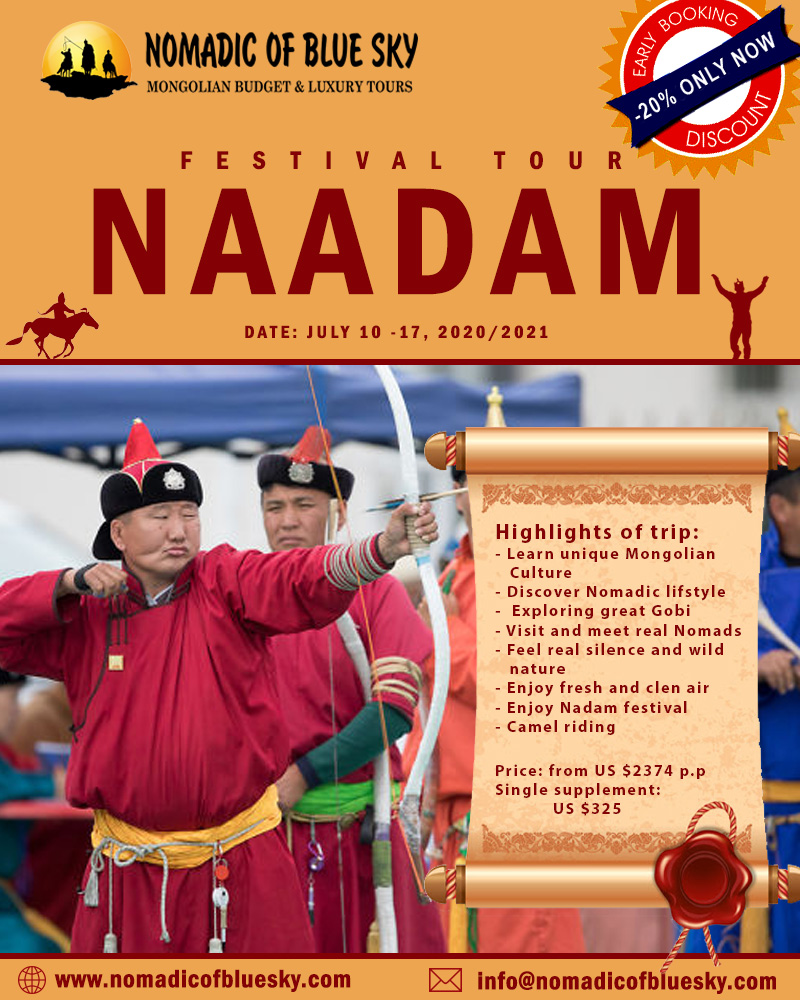