Perhaps the most ancient musical instrument of the Mongols is the "Morinkhuur", invented at least thousand years ago 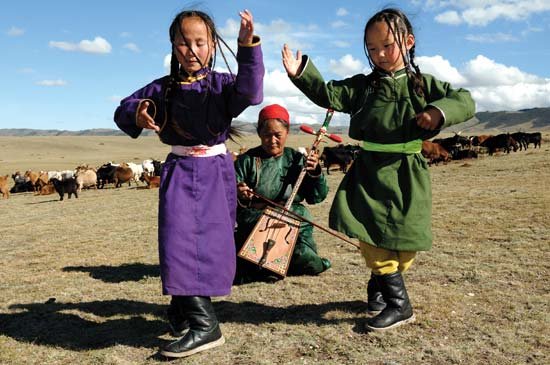 Perhaps the most ancient musical instrument of the Mongols is the "Morinkhuur", invented at least thousand years ago. In Mongolian , morin means horse, and khuur means sound, rhyme, and melody.

This instrument's history is based on a legend of a man, who had a beloved, magical horse that could fly. When an evil man killed the horse, the man made a musical instrument so that he could remember the horse. Originally the handle of the horse-head fiddle was made of horse  ribs and its base is made of horse skin.

Today, the long tail hair of a horse is used for the strings. it is said each tail hair fiber should be processed until it "starts talking". To honor the horse, its head is carved of wood  and placed where the scroll would be on a violin. The wooden neck and the sound box of the instrument are often decorated by the five elements and the horoscope animals  of the  Buddhist 12 year calendar. Finally, the symbol of eternity  is depicted on the sides of the box. The tone of the Morin khuur is tender and beautiful.